Do any of them speak for working people?

The media's inane coverage of Election 2008 hides a question that's worth investigating: Who are the presidential candidates actually in touch with?

IT WAS hard to say what was more ridiculous: the image of Hillary Clinton knocking back a whiskey shot and a beer chaser in an Indiana bar or Barack Obama in a business suit throwing gutter balls in a Pennsylvania bowling alley.

However, claiming concern for his wife's "privacy," McCain released only his own tax returns. Given that Cindy McCain's fortune as heir to the nation's third largest Anheuser-Busch beer distributorship is estimated, conservatively, at $25-50 million, including her return would have blown McCain's attempt to play down his wealth.

All of these maneuvers have the same intent: to show these members of one of the world's richest clubs--the U.S. Senate--to be just plain folks interested in "workin' hard" for ordinary Americans.

Lance Selfa is the author of The Democrats: A Critical History, a socialist analysis of the Democratic Party, and editor of The Struggle for Palestine, a collection of essays by leading solidarity activists. He is on the editorial board of the International Socialist Review.

These pantomimes took on new meaning in light of the latest media- and Clinton-fanned flap over Obama's remarks at a closed-door fundraiser near San Francisco.

In response to a question about how he could reach working-class voters in Pennsylvania, Obama ruminated that in the face of Washington politicians who promised and didn't deliver to people in small towns, it was "not surprising then that they get bitter, they cling to guns or religion or antipathy to people who aren't like them or anti-immigrant sentiment or anti-trade sentiment as a way to explain their frustrations."

For the next week, and into the April 16 "debate" between Clinton and Obama, pundits frothed over whether this comment showed that Obama couldn't really relate to "real" people--unlike, apparently, the beer-swigging, gun-toting Hillary Clinton.

Clinton even went so far as to challenge Obama's characterization of millions of working-class Americans as "bitter"--an incredible assertion considering the millions suffering stagnant or declining incomes, layoffs, unaffordable health insurance or foreclosures. 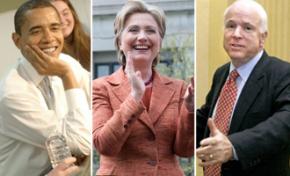 Despite the media feeding frenzy, opinion polls seemed to indicate that the comments hadn't damaged Obama at all. And the Washington Post's Alec MacGillis, in an April 19 profile focused on the depressed western Pennsylvania town of Charleroi, found a lot of "bitterness" at economic and political conditions, and not much outrage at Obama's remarks.

"It's petty squabbling," a postal worker was quoted as saying. A Republican small businessman planning to vote for Obama told MacGillis, "The whole thing is ridiculous. It's quite comical, actually."

THE AMOUNT of energy wasted on this nonsense--based almost entirely on a stereotype of working people--should lead us to ask the question that the media talking heads have avoided: Who are these candidates really in touch with?

Let's start with McCain. For years, he has benefited from an image as a "maverick" and a supporter of reforms to the campaign finance laws to lessen the influence of wealthy individuals and lobbyists.

Yet until the Democrats recaptured the Senate in 2006, McCain chaired the Senate Commerce Committee, from which he regularly did favors for leading telecommunications firms that his committee was supposed to oversee. In return, he accepted campaign contributions, flights on corporate jets and other favors.

While McCain is happy to tout his military career to appeal to working-class voters--whose families are far more likely to include active-duty soldiers and veterans than the average member of Congress--we shouldn't forget that McCain was no draftee or volunteer. He is the son and grandson of admirals and a graduate of the U.S. Naval Academy.

Then there's Clinton--who, along with her husband, the former president, has also done quite well. Having made more than $109 million since leaving the White House in 2001, the Clintons certainly don't travel in the same circles as the rural voters they claim to represent.

And like McCain claiming "privacy" in refusing to release his wife's tax returns, the Clintons use the same claim to shield the identities of the millionaires and billionaires who donated money to the Clinton presidential library, thinking that this would position them for easier access to what they expected to be the Clinton White House.

She promotes the nine months she spent as a lawyer for the Children's Defense League, but this glosses over the fact that most of her 15-year legal career was spent as a corporate lawyer representing the likes of Wal-Mart, on whose board she served.

For nearly 20 years, [Clinton] has been encased in the apparatus of political celebrity. Look at her schedule as first lady and ever since. Think of the thousands of staged events, the tens of thousands of times she has pretended to be delighted to see someone she doesn't know, the hundreds of thousands of times she has recited empty clichés and exhortatory banalities, the millions of photos she has posed for in which she is supposed to appear empathetic or tough, the billions of politically opportune half-truths that have bounced around her head.

Keep that in mind the next time you see Clinton bragging about hunting or knocking back a cold one.

In comparison to McCain and Clinton, Obama seems a lot more ordinary. He uses his biography as the son "of a single mom" who was "on welfare" before being raised by his grandparents to illustrate his empathy with ordinary people whose life stories are similar.

What he doesn't tell you, however, was that his grandmother was a bank vice president who paid for his schooling at an elite Honolulu prep school. Or that much of the time he spent as a "civil rights attorney" at the Chicago law firm of Davis Miner Barnhill & Galland was spent putting together land deals for developers using public money.

THE BIOGRAPHICAL details of all of these candidates show that much of what we know about them is simply manufactured for public consumption. This a part of American presidential politics that goes back at least as far as the 1820s, when the presidential campaign of Andrew Jackson launched the modern Democratic Party.

Writing in 1947 on "Jacksonian democracy," the socialist Harry Braverman recounted how the political fixers of their day managed to sell Jackson, a wealthy (and slaveowning) planter and retired general, as a rough-and-ready man of the people:

The Jackson managers in the campaign of 1828 "cleverly" concealed Jackson's stand on every important issue in national affairs, stressing only his rough western virtues...Twelve years later, the Whigs had the same "brilliant" idea, and put into the field a candidate [William Henry Harrison], who could out-drink, out-fight and out-log-cabin Jackson's party, and he carried the country. Thus was developed the modern mode of class rule concealed behind the appeal to the common man.

Braverman's last point is crucial to recall in the fog of 2008 political campaign manipulation and phony media controversies. The end result of all this is to select, promote and get some public support for a candidate who will be a lot more in touch with the ruling class than with the "common man."

Obama claims his vaunted fundraising machine has engaged millions of average people giving an average donation of $100 to $200. In reality, according to an investigation by the Washington Post, half of Obama's running tally of $240 million comes from people who give more than $200--and 27,000 and counting have written checks for the legal limit of $2,300.

Put a different way, those 27,000 people--many of them executives from Wall Street, Silicon Valley and Fortune 500 corporations or partners at prestigious law firms--account for one-quarter of all of the money Obama has raised.

Obama's campaign has relied on 79 wealthy individuals and corporate leaders, including five billionaires, to organize this network of donors, according to Post journalists Matthew Mosk and Alec MacGillis.

And what might be industry's interest in Obama? Consider the hedge funds increased scrutiny and demands for greater government regulation for their role as part of the "shadow banking system" that has contributed to the current financial crisis.

Hedge funds "have a strong interest in becoming involved in the political process, and that is really the whole story behind their support of Obama," a New York University finance professor told Mosc and MacGillis. "In their analysis--and they have good analysts--Obama is likely to be successful, so it is very much in their advantage to have a strong voice with him."

It doesn't take a genius to figure out that any politician will be a lot more responsive to a billionaire than to an ordinary Joe or Jane who donated $100 over the Internet.