Karen Domínguez Burke looks at the conditions that led to tragedy in Laredo, Texas.

IN TEXAS, if you don't fill out an 18-page questionnaire correctly for food stamps, you don't get them. In Texas, if you fill out a paragraph, including the name and address of the company, and pay a small fee, you can be incorporated.

On December 5, Rachelle Grimmer brought her two children to the Health and Human Services offices in Laredo, Texas, and after a seven-hour standoff, shot her two children, ages 10 and 12, in the head and killed herself. The two children, Timothy and Ramie, have since died.

Rachelle had been in contact with the office since June and hadn't received food stamps because she hadn't provided proof of the amount of child support she received monthly, though she had filled out all the paperwork.

At the time of the shooting, Rachelle and her kids lived in a trailer park "with a crack in the side," according to the New York Times. Rachelle got help with food and clothes from the residents of the trailer park. She had sold her truck to pay for food and rent, so the family walked everywhere, sometimes without shoes, according to a neighbor.

Rachelle Grimmer clearly needed help and was begging for it. But she didn't get it. And in a desperate act, she killed herself and her children. The supervisor of the office had worked out a deal that would provide her the support she needed retroactively from July, but it seems that by that point, it was too late.

ACCORDING TO the U.S. Department of Agriculture (USDA), Texas had the second-highest percentage of households suffering from food insecurity in 2010. Remember that the next time Gov. Rick Perry tries to say that Texas is recession-proof. 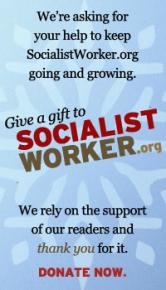 But this isn't the fault of the workers at the Department of Health and Human Services. There has been an increase of nearly 50 percent in food assistance applicants since the crisis hit in 2008, and if Perry's government really cared about the welfare of its people, then it would have hired more state workers to process the applications in a timely manner.

This didn't happen, and now the Health and Human Services Commission is being sued because the agency illegally denied benefits to eligible Texans by not processing the applications on time.

The priorities in the Texas government are backward. If you're a corporate franchise in Texas, the tax you pay is 0.25 percent--that is, one-quarter of 1 percent of income in taxes. When you're a person, you pay 8.25 percent on everything you buy, unless it qualifies as food, or if it has a separate tax, like gas or alcohol or cigarettes, which have an even higher rate.

The sales tax disproportionately affects the poor, since a higher percentage of their income is spent on paying these taxes compared to what a wealthy person pays. According to retired state worker Leslie C., "many Texas state employees earn so little that they qualify for food stamps and for the Children's Health Insurance Program. These include mostly full-time employees--some of whom, ironically, work in the offices that determine food stamp eligibility."

The unemployment rate in Texas is 8.4 percent, and the unemployment rate for Latinos and Blacks is higher, even though Texas is a majority Latino state. Some statistics put the ratio of Latino to white unemployment at 1.7 to 1, meaning that for every white person unemployed there are nearly two Latinos unemployed. These percentages don't count those who have stopped looking for work after long unemployment, so presumably the rate may also be higher.

Texas has one of the worst income disparities in the country. According to a study by the Center for Budget and Policy Priorities and the Economic Policy Institute, Texas ranked at or near the top among the 50 states in terms of income inequality in the early 2000s. The CBPP-EPI study concluded that in the early 2000s, the income gap between the richest 20 percent of families and the poorest 20 percent in Texas was the second largest in the nation.

According to a Texas Politics study at the University of Texas:

[T]he income gap between the richest 20 percent of families and the middle 20 percent was the largest in the nation. Worsening income distribution has been a trend throughout the country for some time, but the trend is pronounced in Texas in part due to the historical resistance in the political culture to helping the poor and less fortunate by providing government support in the form of social services, and the pattern of business access to the legislative process.

Needs that are typically filled by food banks and churches are not being met for as many families as before, as those who would typically give are facing higher food costs and comparatively lower wages or long-term unemployment.

In an economic situation like this, we can expect more incidents like the violence Rachelle committed. People do desperate things in desperate times. Unfortunately, Rachelle may have thought that it was better to kill her children than have them live through food insecurity.

With a government that prioritizes reduced tax rates for corporations over funding for state services for the poor, it's no surprise that so many who need help aren't getting it. The economic situation is a recipe for disaster for millions of families. Taxing the rich is a simple solution that would provide the necessary funds to fill the gaps of employment at state agencies and provide the aid for people who need it.

Rachelle may have pulled the trigger, but having a system that prioritizes people instead of profit--and with a social safety net to provide needy kids housing instead of tents on the beach--could have prevented such a disaster.