Gary Lapon explains why the production and distribution of vaccine for the H1N1 flu virus went so badly wrong.

IT WAS adding insult and injury to injury.

With hospitals, doctor's offices, clinics and schools around the country waiting on scarce supplies of the swine flu vaccine, Wall Street giants Goldman Sachs and Citigroup ordered up more than 1,000 doses between them for company doctors to administer to their employees in New York City.

Distribution of the vaccine is a national scandal, but people's anger was compounded by the news that the banksters jumped to the head of the line. "Wall Street banks have already taken so much from us," John VanDeventer of the Service Employees International Union wrote on the union's Web site. "They've taken trillions of our tax dollars. They've taken away people's homes who are struggling to pay the bills. But they should not be allowed to take away our health and well-being."

But as disgusting as Wall Street's arrogant behavior is, the bigger picture is more serious and much scarier--thousands of people are dying preventable deaths, and millions are becoming seriously ill because the U.S. government's response to the swine flu pandemic relies on a for-profit pharmaceutical industry that prioritizes profits over people and a public health infrastructure that has been gutted by budget cuts. 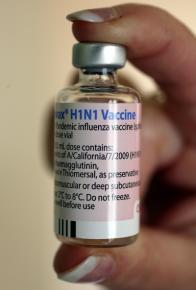 According to the U.S. Centers for Disease Control (CDC), 3,900 U.S. residents have died from swine flu--the strain of the flu virus officially known as H1N1--since April (540 of them children). That's almost four times higher than previous death toll announced by the CDC--and meanwhile, only 5 percent of Americans report having received the vaccine. Even before the Centers' dramatically higher death tolls were released, President Obama declared a national state of emergency because of the pandemic.

HOW DID this happen? A recent USA Today/Gallup poll found that "58 percent place a great deal or moderate amount of the blame for the lack of vaccine on the federal government...and 62 percent blame drug companies."

President Obama promised in July that 160 million doses of swine flu vaccine would be available by the end of October. The Department of Health and Human Services revised that estimate to 40 million and then to 28 million--enough doses for just 17.6 percent of the 159 million Americans considered to be at high risk for swine flu.

The government had plenty of time to prepare. Scientists have been predicting this crisis for years--a virulent strain of the flu virus among animals developing into a strain that affects humans, and spreading rapidly because no one has immunity to it. The specific form of H1N1 that made the jump to humans was discovered in pigs in 1998.

As Mike Davis, author of The Monster at Our Door: The Global Threat of Avian Flu, wrote in an article for SocialistWorker.org earlier this year, "[T]he central paradox of this swine flu panic is that while totally unexpected, it was accurately predicted." Researchers, Davis said, "urged the creation of an official surveillance system for swine flu. That admonition, of course, went unheeded in a Washington."

The federal government, which can find trillions of dollars for the occupations of Iraq and Afghanistan and to bail out Wall Street, hasn't devoted enough resources to build the public health infrastructure necessary to develop and distribute vaccines to protect the population. Instead, it relies on the pharmaceutical industry.

The government awarded $2 billion in contracts for the production of 195 million doses of H1N1 vaccine to the for-profit pharmaceutical companies Norvartis, Sanofi-aventis, GlaxoSmithKline, CSL Limited and MedImmune--but these companies so far have delivered just 20 percent of the original order.

As Barbara Ehrenreich pointed out in an article on TomDispatch.com, the shortage is due to complications involving these companies' use of outdated technology from the 1950s, which involves growing vaccine in chicken eggs.

Rather than invest in developing more efficient, reliable and effective ways to manufacture vaccines, which "can be tricky and less than maximally profitable to manufacture...Big Pharma...[traditionally prefers] to manufacture drugs for such plagues as erectile dysfunction, social anxiety, and restless leg syndrome," Ehrenreich wrote.

Congress--which voted to cut federal funding to ACORN after a handful of its employees were caught on tape offering advice on how to evade taxes to a couple right-wingers--has so far remained silent about the federal government's contract with GlaxoSmithKline (GSK), which has a long history of wrongdoing.

In 2003, GSK paid an $88 million fine for overcharging the government's Medicaid health program for low-income people, and in 2007, it paid an Internal Revenue Service fine of $3.1 billion after allegedly using "transfer pricing" to dodge paying billions in taxes, the largest tax settlement in history. And in 2008, an FDA official accused GSK of attempting to "sugar-coat" the increased risk of suicide among children taking its anti-depressant Paxil.

Exacerbating the vaccine shortage is the inability of state and local health departments to effectively distribute what has been produced. According to Reuters, Dr. Anne Schuchat of the CDC told a Senate health subcommittee that her agency has had difficulties reaching state and local health officials who are on furlough because of budget cuts that have come as a result of state budget shortfalls--in a system already weakened by 15,000 job cuts over the past two years.

But there's one player in all this that isn't suffering--the pharmaceutical industry. The drug giants stand to make a hefty profit off of swine flu vaccines--estimates range from $7.6 billion to $18 billion in sales worldwide, depending on severity of the pandemic.

Meanwhile, people are waiting in long lines for hours for vaccines that haven't been produced or distributed. In late October, ABC News reported on a typical scene: hundreds lined up starting at 9 a.m. at a makeshift clinic in a Chicago school, scheduled to open at 3 p.m., only to be turned away 30 minutes after the clinic opened because there weren't enough doses to go around.

SOME PEOPLE have drawn comparisons between the government's botched handling of the pandemic and its failure to respond to Hurricane Katrina in 2005.

Another parallel to Katrina is apparent when you see who is most impacted by swine flu. According to the New York Daily News, "[H]alf of the H1N1 children's deaths between April and August were among African Americans and Hispanics," though these groups account for only around one-third of children in the U.S.

Like the poor and mostly African American residents of New Orleans left behind to endure the Katrina disaster, poverty and racism are the main factors behind why Blacks and Latinos are at greater risk for complications arising from swine flu. According to USA Today, these groups are "four times more likely [than whites] to be hospitalized with the virus."

Loretta Jones of Healthy African American Families in South LA blames the low turnout on distrust of the health care system. One stark reason for that distrust, Jones said, was the "Tuskegee Syphilis Study, which lasted from 1932 to 1972, in which federal researchers withheld treatment from Black men." But, said Jones, "it's more than the legacy of Tuskegee--it's a whole lifetime of poor access to health care."

Like the uninsured patient who goes to the dentist with a toothache, only to discover a mouth full of decay, the swine flu pandemic has revealed the consequences of decades of privatization and cuts to public health and social services--with the effects hitting working-class people, and especially people of color, hardest.

Instead of vaccinating the swine on Wall Street, the government should tax them and use the revenues to produce vaccines and other drugs that are accessible and affordable for all.