Welcome to the new SocialistWorker.org

MAY DAY marks the launch of the new SocialistWorker.org.

With this wholesale renovation of our Web site, Socialist Worker enters a new era. We plan, starting today, to begin publishing news and analysis daily on the Web--the kind of articles and features you know from the weekly Socialist Worker, but more often, and more of them.

To make this possible, the paper edition of SW will come out every two weeks, instead of every week. We'll devote these resources, instead, to publishing on the Web.

That will mean more on-the-ground reports of struggles taking place today that you never read about in the mainstream press--plus articles about the activists who organize them and the questions they're debating.

We'll add new columnists and commentators, such as John Pilger and Mike Davis, plus a greater selection of articles from writers of the international left. Our current contributors--columnists like Sharon Smith and Paul D'Amato, journalists Lee Sustar, Elizabeth Schulte and Eric Ruder, and many others--will get to write more often and in more depth. 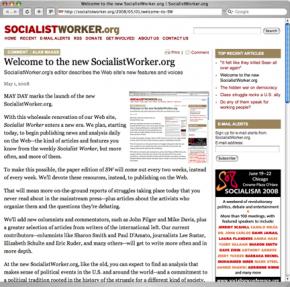 At the new SocialistWorker.org, like the old, you can expect to find an analysis that makes sense of political events in the U.S. and around the world--and a commitment to a political tradition rooted in the history of the struggle for a different kind of society.

The new Web site has been designed to make it easier to find the information and analysis you're looking for. For now, you can see what we've published this week, browse articles by department or scan story lists by your favorite columnists. And as we introduce new features over the coming months, you'll find lists of related articles and additional reading with each feature, video and audio to add a new dimension to our coverage and collections of articles on pressing political issues.

You can keep up with what's new on SocialistWorker.org in a number of ways. Start with subscribing to our regular e-mail alerts that point you to the latest articles and features. We're also introducing an RSS feed to update you about new content, with plans for more specific feeds as time goes on.

Socialist Worker began publication as a monthly newspaper 31 years ago in April, and it has seen many changes. One of the biggest--and one that has had a profound impact on all parts of the media, mainstream and independent--is the growing importance of the Internet.

Already, SocialistWorker.org gets tens of thousands of visitors each week--among them, thousands of e-mail subscribers. And that's a fraction of the potential audience for our site. We expect the redesigned SocialistWorker.org will win more readers still, but for this to happen, we need those of you who are regulars already to spread the word--to friends, to coworkers, to fellow activists. Please take the time this week to pass along a link to our site.

At the same time, Socialist Worker has always aimed to be more than a source of information and solid analysis. We want to show not only what's wrong with society and why, but how it can be changed--and we hope to persuade our readers to be involved in the struggle to win that change.

SocialistWorker.org is no different in this regard--so we'll continue to highlight our reports on grassroots struggles and discussions of the issues facing activists, and over time, we hope to find more ways to connect readers on the Internet with political activities taking place on the ground.

The new Web site is no different in one other way--we depend on the financial support of our readers and supporters. Please help us out with a donation at any level you can afford and contribute to this exciting new project.

ONE OF the great rewards for all the hard work put into producing Socialist Worker over the years has been the fact that we have been able to give a voice to those struggling for equality and justice who never get heard in the mainstream media.

We're proud that our newspaper has been there when it counted--in support of the rebel P-9 meatpackers on strike against Hormel in the 1980s or the locked-out Staley workers a decade later; with the young men and women who stood up to police brutality and racist violence in New York City in those years; or giving a platform to leaders of international struggles from apartheid South Africa to Brazil and Bolivia to Palestine and Iraq today.

Through all this, Socialist Worker has depended on the hard work and many talents of all the people who wrote for it, produced it and distributed it. Some are rightly recognized on the left for their writing or their organizing--many others aren't. This redesigned and vastly improved Web site is the result of even more people putting their skills to work for us.

Two people especially deserve thanks for the new SocialistWorker.org. Josh On and Derek Wright volunteered untold hours on this project, providing the computer wizardry and design skills to make it work. I couldn't possibly thank them enough.

For SocialistWorker.org to accomplish its goal of being a voice for our side, it relies on many people--contributing their knowledge and experience as writers, promoting the Web site and the newspaper, putting the ideas it represents into practice in building an opposition to the status quo of corporate power and politics as usual.

The coming months and years will present new opportunities for organizing grassroots struggles and rebuilding a left alternative in the United States. Our hope for SocialistWorker.org is to contribute to that effort and grow with it, as it takes new shape and gains strength.