Health hazard in a Harlem school

New York City teacher Brian Jones talks about the ramifications of a safety issue uncovered at his school.

I TEACH at an elementary school in East Harlem, where my coworkers and I recently learned that there are high levels of cancer-causing PCBs (polychlorinated biphenyls) in our building.

A reporter from the New York Daily News took samples of caulking from nine random new York City schools, and lab tests found high levels of PCBs in eight of them. We were on the list.

What are PCBs? They are a manmade substance that was used, in this case, to strengthen caulk. PCBs were banned in 1977 when they were found to be hazardous to humans. The Daily News article cites studies indicating that exposure to PCBs can "inhibit the growth of brain cells" in children and has been linked to "anti-social behavior, depression and attention deficit hyperactivity disorder-type symptoms."

Probably not a good idea to leave the stuff lying around in an elementary school, right?

Well, not according to the NYC Department of Education (DOE). After learning about the Daily News findings, the DOE conducted its own investigation and found that the PCBs had not become airborne (except in one of the schools named in the report--not ours). 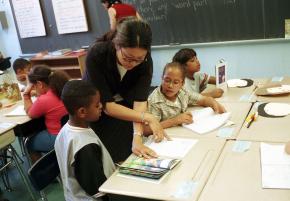 The DOE maintains that the caulk isn't hazardous as long as it's left "undisturbed." However, according to a fact sheet from our union, the United Federation of Teachers, on government environmental regulations, "Materials containing 50 parts per million (ppm) or more of PCBs must be disposed of as a hazardous material." The Daily News reported that our school's caulk has PCBs of 5,300 ppm--more than 100 times the acceptable limit.

In the last two weeks, we have been repeatedly assured that the building is safe. Officials from the School Construction Authority met with us and explained that the Daily News only sampled caulk outside the building, while their investigation was done inside the building--and they only found PCBs to have leached out from the caulk in one room, and that room had been scrubbed and scoured.

We have also been told that PCBs are essentially omnipresent in modern cities, and that we have probably been exposed to them in greater quantities just by eating fish over the years. In the words of one of our union's health officials, PCBs are an "immortal" substance--they are not processed or removed by body functions, they just build up over time.

But these words haven't provided much reassurance--for several reasons.

First, we have yet to see the actual lab results with our own eyes. One teacher called the Daily News reporter the same morning the story came out, and within minutes received a copy of his lab report. The DOE tests were conducted a month ago, and we have yet to receive the results. We have only been told that they found "acceptable" levels of PCBs--we haven't seen the actual report!

Officials made the mistake of telling us, "Your job is to teach, not to interpret technical documents." This was a slap in the face and further confirmed teachers' fears that something doesn't add up here.

IT'S NOT just about the PCBs. As one teacher pointed out, "You're talking to a skeptical audience here. They told us that Ground Zero was safe for the rescue workers. Look how that turned out. And now we see that the FAA was in bed with the airline companies. The regulators aren't regulating."

The issue is bigger than this health hazard. Even if it turns out that the danger posed by the PCBs is low, experience tells us that we are teaching in a toxic environment.

East Harlem leads the nation in respiratory illnesses, and it's not hard to see why. You can ask the legions of 8-year-olds huffing and puffing their way up and down staircases. Or just look around the neighborhood. You'll see Harlem River Drive a stone's throw away, packed with bumper-to-bumper traffic. You'll see a bus depot, an overhead commuter train roaring by--and, of course, plenty of buildings with rotting walls, mold, rats and roaches.

Several of the long-term teachers in our school have developed respiratory illnesses. We have an abnormally high rate of cancer among the staff and a high rate of mortality. This school year, it seems like we have had an especially high rate of hospitalizations, and tragically, one colleague passed away last term.

There are great things happening at our school. We just had an arts festival that showed off the wonderful dance, art, music and even drama programs we have. Unfortunately, that's a lot more than most kids in Harlem get.

This is not about "negative publicity." This is about doing the things for our school that wealthier neighborhoods always demand for theirs.

We may not yet have all of the evidence. Perhaps we can't attribute every illness or fatality to the conditions of the neighborhood and the school. But it's obvious to those who have been there the longest that, despite working in a clean, relatively well-maintained building, something is not right.

The students and parents are concerned. But we, the teachers, happen to have a big organization (our union), through which we ought to be able to do something. We need to see the DOE report. And we need screens on our windows, new filters for the air conditioners and, yes, removal of the PCBs.